A potential of low energy (< 1keV) electron channeling contrast imaging (LE-ECCI) by scanning electron microscopy (SEM) is demonstrated to characterize the crystallographic stacking sequence of hexagonal 4H-SiC single crystal within the first unit cell thickness from the topmost surface (< 1nm). It is also revealed that the LE-SEM signal intensity associated with the crystallographic orientation has enough sensitivity to even the change in Si-atom and C-atom (i.e. the change in surface polarity) at a primary electron energy of 0.4keV. The obtained data can be explained by an electron multiple scattering cluster (EMSC) theory where the interference of both incident and diffracted electron waves is considered within a finite size (a few nanometers) of an atomic cluster.

So far, for characterizing local crystallographic orientation of bulk crystals using SEM, ECCI with a higher energy (> 10keV) of primary electron beam has been utilized in order to obtain larger interaction volume due to its deeper penetration depth [1]. The electron channeling contrast (ECC) from only a shallower surface region with lower energy has not been applied yet because of the consideration attributed to the lack of enough interaction volume in the lower energy regime. In fact, to our knowledge, the critical smallest volume (specimen minimum thickness) has not been investigated yet associated with ECC. In our previous study [2], a crystallographic orientation contrast from two bilayers thick surface layers of 4H-SiC single crystal was observed by changing an incident LE (< 1keV) EB direction with respect to the orientation of an atomically flattered 4H-SiC surface (Figs. 1). This contrast is considered to be the ECC in an extremely low electron energy regime. This result brings about the assumption that even the two bilayers thick interaction volume can contribute to the formation of ECC. In order to verify this assumption, in this study, crystallographic orientation dependence of SEM signal intensity was quantitatively measured on an atomically flat 4H-SiC surface. Furthermore, in order to exploit the Z-information, different polar faces, Si-terminated (0001) Si-face, and C-terminated (000-1) C-face were compared, where atomic sites of Si- and C-atoms are switched in the crystal. The obtained results were compared with the EMSC theory in which the concept of short-range periodicity is included [3]. This theoretical model is more applicable to reproduce the effect of shallower information depth of the LE-EB, compared with a Bloch-wave model utilized in the conventional ECCI in the higher electron energy regime.

Fig.2 shows the representative SEM signal intensity from 4H-SiC Si-face and C-face as a function of the sample tilting angle obtained at a primary electron energy of 0.4 keV. Although the profile shapes seem to be different at a glance, peak positions are almost the same. Considering the fact that the atomic arrangement below the surface is identical both in Si-face and C-face SiC, except Si- /C-atomic sites in the crystal, the difference in the profile shape is ascribed to the contrast of backscattered electron yield [4]. The similar trend was also reproduced by the EMSC calculation.

Some of this work was financially supported by the New Energy and industrial Technology Development Organization (NEDO). The authors would like to thank Toyo Corp. for their experimental supports. The authors are grateful to Dr. Tomohiro Matsushita (Japan Synchrotron Radiation Research Institute) for his theoretical support.

Figure 1. (a) An example of low energy electron channeling contrast (LE-ECC) from atomically flat 4H-SiC (0001) surface obtained at a primary electron energy of 1.0 keV. (b) Experimental geometry to acquire the LE-ECC (schematic illustration). 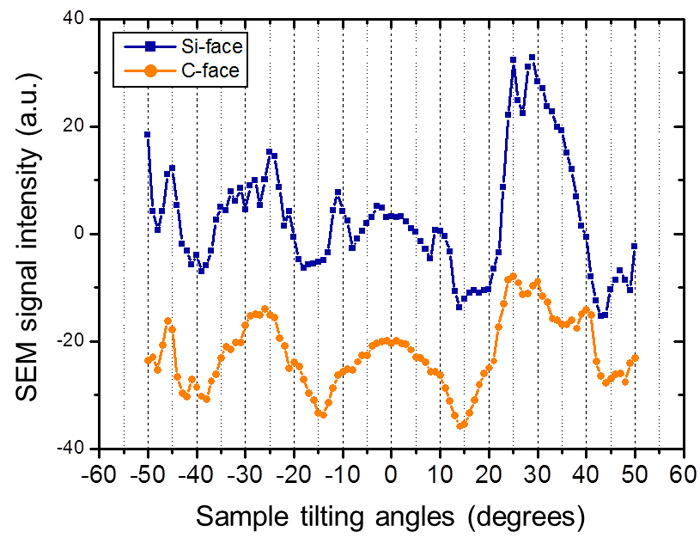