Measurement of magnetization at atomic resolution via dichroic electron energy loss spectroscopy (EELS) with vortex beams remains a hotly-discussed and as-yet unproven goal for electron microscopy [1-5]. A satisfactory explanation for the lack of successful demonstrations of this technique has not yet emerged. However, a number of recent predictions [2,5,6] for dichroism include one common oversight: the efficiency of the dichroic measurement strongly depends on whether the outgoing phase distribution–or, equivalently, the outgoing orbital angular momentum (OAM) distribution–is measured.

Dichroic absorption spectroscopy experiments with circularly polarized light are much simpler; the photon is absorbed, and necessarily transfers all angular momentum to the specimen. Electrons in a transmission electron microscope are not absorbed, and can carry non-zero linear and orbital angular momentum away from an interaction with a  specimen. Incident electron vortices with mħ OAM have a significant probability to scatter to an outgoing state with unchanged mħ OAM. Dichroic electron energy loss spectroscopy, then, can be made far more efficient by post-selecting for the component of the final state which has nonzero Δm. There exist qualitative methods to post-select for more of this component of the final state [7]. There are also some semi-quantitative interferometric methods [8] that do not work for the inelastically scattered final states that one must measure in a dichroic EELS experiment, as they cannot be coherently interfered with an incident reference wave. In order to accomplish practical, highly efficient dichroic EELS, a quantitative non-interferometric method to spatially separate OAM will be necessary.

We propose a magnetic field-based mechanism for on-axis separation of electron OAM modes. We show that the vector potential of any cylindrically symmetric current distribution that flows azimuthally–a standard magnetic round lens–can produce an orbital angular momentum-dependent focal length, where the focal length is linear with the electron orbital angular momentum (see figure 1 for a cartoon visualization). Figure 2 shows multislice simulation [9] of the phase distribution acquired by a 20ħ electron vortex passed through a lens constructed to produce exaggerated OAM dispersion stronger than the normal lensing effect. Figure 3 shows the 20ħ and a -20ħ passed through the same strongly dispersive lens and propagated 10 millimeters. This shift in focal length can be used, in conjunction with a spectrometer entrance aperture to block out defocused modes, to produce a more efficient magnetic dichroism spectrum.

As one might expect, this shift in focal length is very small in a standard magnetic round lens. We have explored the physical design and optical configurations that might allow for a practically realizable orbital angular momentum spectrometer. In particular, there are two stackable lens combinations that produce an OAM-dependent magnification. If successfully implemented, this OAM magnification system would allow for parallel, quantitative measurement of the full orbital angular momentum distribution of an electron beam without a coherent reference beam.

This work was supported by the U.S. Department of Energy, Office of Science, Basic Energy Sciences, under Award # DE-SC0010466. 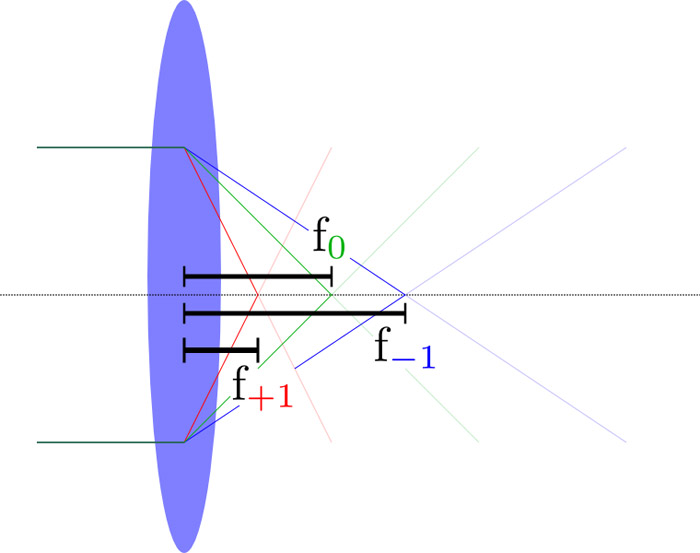 Figure 1: Cartoon illustration of the linear shift in focal length between a +1 (red), 0 (green) and -1 (blue) OAM mode passed through a magnetic round lens. 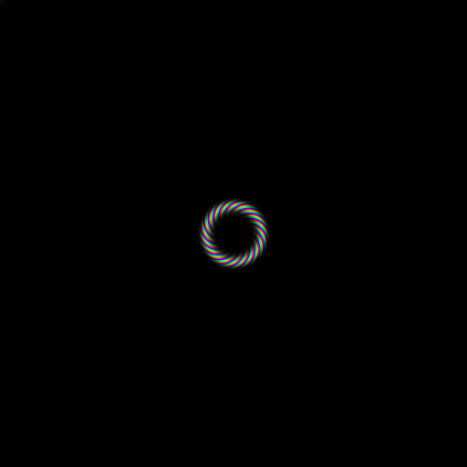 Figure 2: Simulated phase and intensity of -20ħ vortex at 300 keV immediately after passing through a lens with strong OAM dispersion. 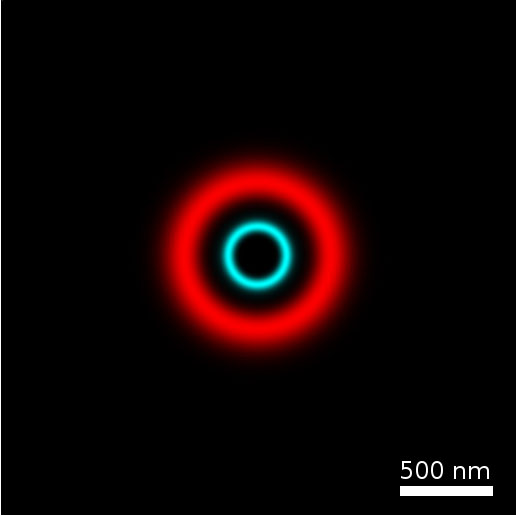 Figure 3: Simulated +20ħ (large, red) and -20ħ (small, teal) vortices after propagation over 10mm after passing through the strongly dispersing spectrometer field in Figure 2. Scale bar applies to both Figure 2 and 3.