We present the prototype of an instrument add-on that tracks the absolute position and orientation of a sample, and that can be implemented on several microscopes in order to provide virtual coupling between the platforms. It is aimed at avoiding wasting observation time at finding the same regions of interest indentified in former observations. It is also believed to improve the throughput of characterization platforms by providing an easy way for researchers to resume observations initiated at different availability slots of a microscope.

While fiducial markers and shuttle systems offer some solution for localizing regions of interests, they come along with a number of limitations, including requirement for tedious calibration, inadequate accuracy, and limitation to proprietary hardware. Another approach consists in attaching to the sample a plane with coded markers [1], and deduce the sample position from the observation of these markers. We have improved this concept by introducing the possibility to perform real-time determination of the sample position [2] during normal microscopy observations. The system consists in a coded plane substrate holder, an add-on to the microscope that allows the observation of the coded plane, a software module that deciphers the coded substrate, and a user interface.

The precision of the position and angular orientation measurements have been investigated. It is found that the standard deviation is less than 1nm in position, and less than 10µrad in orientation. Such precision values obtained with an image-recognition based approach establish that our position recognition system works in a superresolution regime, corresponding to localization microscopy. While this exceeds the usual requirements of optical microscopy, in practice, it is useful to assess the mechanical drifts of the microscope that degrade the precision, and check that theses drifts are acceptable, as discussed further. Fig. 1 gives an example of a sample map that has been produced with a succession of observations performed on two different microscopes and with different magnifications. The red rectangle outlines the real-time observation region on the sample map. Such cross-plateform absolute referencing system is believed to make it easier for communities who have some definite microscopy modalities as gold standard, to add the benefits of other modalities such as Raman microscopy.

Another interesting application of our approach is the assessment of the drift of microscopy apparatus and the reproducibility of moving stages. In this “stage patroller” configuration, the coded plane is observed through the main camera of the microscope and the obtained images are interpreted into position and orientation information. The drift of the platform is measured by recording the position as a function of time, with no intentional movement. Fig. 2 shows the drift on an Olympus BX41 equipped with a Marzhauser stage.

The stage patroller configuration has also been used in order to assess the accuracy of a moving stage. This is of particular importance for a number of microscopy modalities. While long distance accuracy of moving stages is generally not so crucial in microscopy, the capability to return at a same exact position is very important. Any departure from positioning reproducibility may result in misleading images due to distortion or shifts, when microscopy information is obtained by sweeping the stage around the position of interest. Our “stage patroller” configuration provides an easy way to observe the reproducibility accuracy of a moving stage. In an experiment, we instructed the moving stage to move repeatedly between 4 corners of a 500µm square. Figure 3 shows a close view around one of the square corner of the measured trajectory map. It can be observed that there is a significant scattering of the corner position, which may blur even normal resolution optical microscopy images. As a consequence, real-time absolute sample position referencing add-on may prove very useful to avoid such hard-to-detect blurs and shifts. The stage patroller may also be used to improve the reproducibility of a moving stage, by adjusting some rather cryptic user-defined stage settings, through a trial and error approach.

Fig. 1: Sample map obtained by several observations sessions on 2 microscopes, the position referencing being obtained as described in the text. The red rectangle represents the actual observation zone on the microscope. 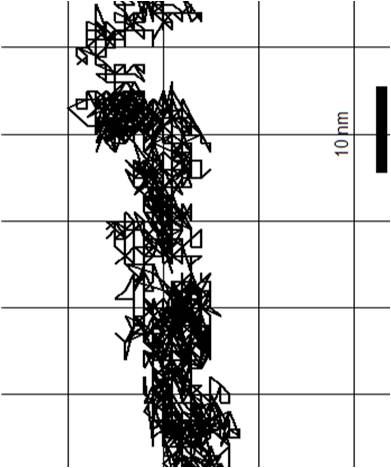 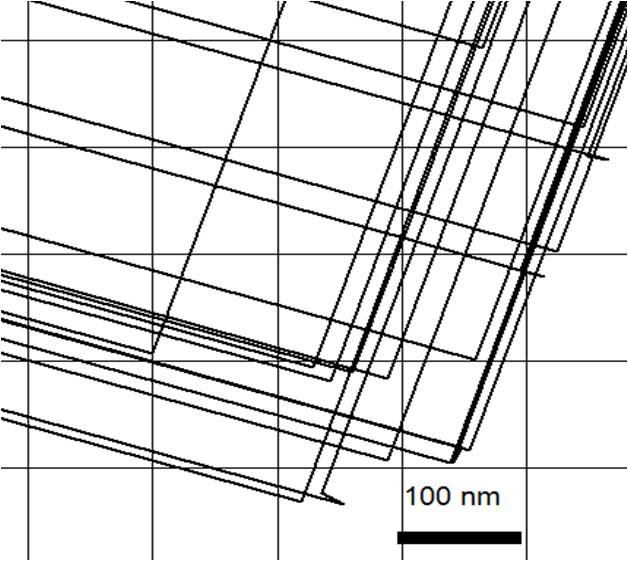 Fig. 3: Detail of the measured trajectory map of a microscope stage, as a result of an instruction to repeat a given trajectory defined as a 500µm square.