Quantum spin liquids (QSL) are an interesting state of matter and have inspired a great number of investigations into materials showing triangular nets of magnetic ions. In this work we present evidence that one of the targeted phases has indeed a triangular order of Ni ions, but only on a range of about 10 nm.

The QSL state was proposed as the ground state for a system of spins on a triangular lattice that interact with their nearest neighbors via an antiferromagnetic interaction. Recently, candidates from the family of 6H-perovskites Ba3MSb2O9 (M= divalent transition metal) have retained attention as QSL materials. The case of Ba3NiSb2O9 seems particularly interesting since it could represent an experimental proof of a QSL with spin S = 1. Three different structure types were reported for this compound. All of them are built up by the stacking along the c axis of layers made of either NiO6 or SbO6 octahedra and differ by the way layers are stacked via either corner or face sharing of the octahedra.

We focus here on the 6H-B form of Ba3NiSb2O9 which can be obtained by applying a High Pressure – High Temperature (HP-HT) treatment in the range 3 to 6 GPa at 600°C. This compound was reported to present no magnetic order down to 0.35 K, suggesting that it could be an experimental realization of a gapless QSL. In order to investigate this behavior by both nuclear magnetic resonance (NMR) and muon spin resonance (µSR) we synthesized this phase in HP-HT conditions.

X-ray powder diffraction on a laboratory source (Bruker D8) and neutron powder diffraction on the D1B beamline of the ILL (Grenoble, France) have been performed. The refinement of the structure using these data showed disorder of Ni and Sb atoms on the sites of the triangular lattice. In that case, the absence of magnetic ordering could be simply related to the structural disorder of the magnetic cation framework, in which the triangular planes are not preserved. For a correct interpretation of physical properties of the samples, it is thus mandatory to clarify the nature of the disorder and confirm (or not) the existence of Ni triangular planes in the structure. Therefore, we have undertaken a thorough investigation of the structural properties of 6H-B Ba3NiSb2O9 using precession electron diffraction and Z-contrast imaging.

STEM-HAADF Z-contrast imaging (figure 1a) shows rows of bright contrasts that can be linked to the structural model of Ba3NiSb2O9 (figure 1b). Figures 1c and 1d show the intensity profiles in the green and pink boxed areas, respectively, with theoretical intensities based on the atomic numbers superimposed. As expected, the contrast corresponding to the Ba atoms (green) shows the highest intensities. The intensity in the center of the profiles corresponds well to a Sb atom (yellow). However, on the two remaining positions, where the 6H-B structure has either a Sb or a Ni atom (blue) the expected intensities differ from the observed ones. The observed intensities on the Ni/Sb sites can be interpreted as Sb and Ni being both present in the atomic columns.

Precession electron diffraction on a thin particle showed that the symmetry of the crystal isn’t compatible with the P63mc space group proposed for 6H-B. The [010] zone axis (figure 2a) shows no mirror symmetry perpendicular to the c* direction and the existence of the 003 reflection. This is incompatible with a 6-fold axis or a c glide plane in the crystal. The correct space group must therefore be trigonal.

Figure 2b shows a structure compatible with all our observations. Here the Ni and Sb atoms are on distinct sites, different from those reported for the 6H-A and 6H-B forms, thus breaking the mirror symmetry perpendicular to c and the c glide plane.

In conclusion, Ni-triangle planes can effectively be present in this structure but only in domains of up to 10 nm in size. At the larger scale seen by X-rays and neutrons, typically several 10s nm we observe an average of several domains and the average symmetry becomes hexagonal with a statistical Ni/Sb disorder on the cation sites of the face sharing octahedra. 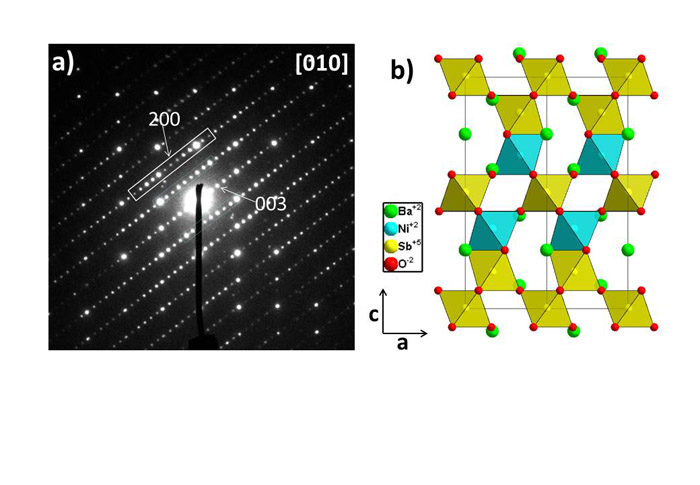 Figure 2 : a) Precession electron diffraction pattern of the [010] zone axis. The absence of a mirror symmetry perpendicular to c* is clearly observed as well as the observation of the 003 reflection. b) Structure model proposed containing triangular planes of Ni ions.